We believe in mechanical cleaning – it is not enough to simply spray some kind of chemical on the heat exchanger or treat it with ozone. The most important thing is to remove the dirt deposited on the fan – this can be done by cleaning the fan mechanically or washing it in water.

This is the only way to make sure that the air emitted by the A/C is indeed clean and healthy!

We clean and disinfect A/C equipment with a unique, Hungarian-developed, health- and environment-friendly, organic cleaning and disinfecting liquid. The cleaning agent we use provides protection against 99.9999% of the infections caused by mold, fungi, viruses and bacteria found in air conditioners.

The general detergents available in stores are not 100 percent degradable, so chemical residues remain on the parts of the A/C unit, which mix into the air in the room when the unit is in operation, and you breathe them in.

In addition to being highly efficient, the cleaning agent we use also breaks down completely in a short time, leaving no ecological footprint.

It has no harmful effect on your health as it consists of natural substances only.


Our colleagues are COVID-19 vaccinated with two shots. 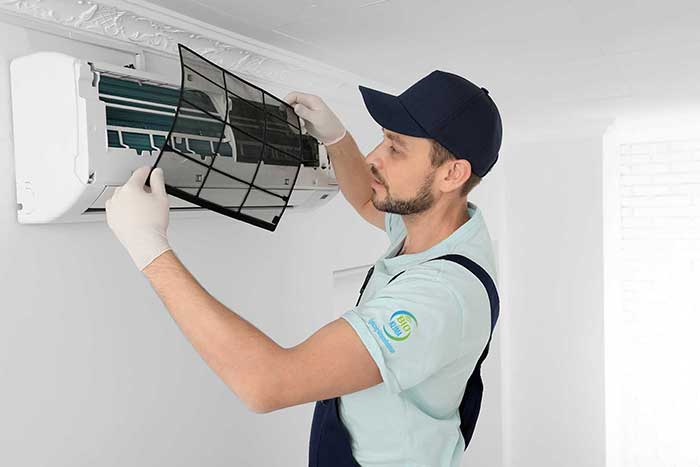 When should an air conditioner be cleaned and disinfected?

Air conditioning equipment can become home to various bacteria and fungi, so A/C units should be both cleaned and disinfected at least once a year. Units also used for heating should be checked at every change of season, that is, in spring and autumn. If a home is located near a busy road, where the air is more polluted, or if the owners keep pets or smoke inside, the air conditioners should be cleaned much more frequently, as more intense use leads to faster dirt buildup and increases the likelihood of pathogen growth.

What needs to be cleaned and disinfected in an air conditioner?

The so-called split air conditioners most often used in households consist of one or more indoor units and an outdoor unit. It is the indoor unit that directly provides cool air for the home. In the indoor unit, the filters, airflow blade(s), heat exchangers, drip tray and fan need to be cleaned and disinfected.

We believe in mechanical cleaning – it is not enough to simply spray some kind of chemical on the heat exchanger or treat it with ozone. The most important thing is to remove the dirt deposited on the fan – this can be done by cleaning the fan mechanically or washing it in water.

This is the only way to make sure that the air emitted by the A/C is indeed clean and healthy! 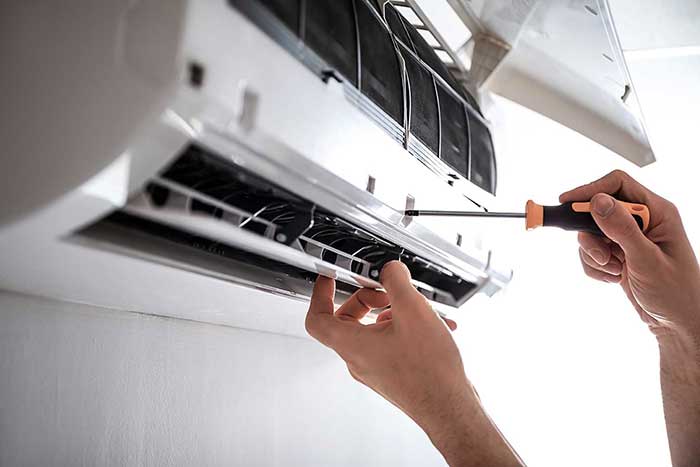 Why should an air conditioner be cleaned and disinfected?

In order to protect yourself and your family from the various viruses, fungi and bacteria that may grow in your A/C unit.
When it comes to A/C-related diseases, you usually hear about the so-called legionnaires’ disease – caused by Legionella bacteria – the primary cause of which is the use of neglected, inadequately cleaned air conditioners.

The name of the disease dates from 1976, when a Philadelphia convention of the American League, a veterans’ organization, was followed by an outbreak of mass pneumonia, which claimed over 30 lives and received considerable media attention.

If you inhale air infected with Legionella and the bacteria reach your lungs, the initial influenza-like symptoms may – depending on your resistance – be followed by severe pneumonia, diseases of the digestive and nervous systems and ultimately even death.

There are two distinct types of legionellosis:

An inadequately cleaned A/C unit may also trigger additional respiratory and other symptoms, including dry eyes, a parched or scratchy throat, a dry nasal mucous membrane or, in more severe cases, headache, dizziness, fatigue and tinnitus.
It may also induce allergic symptoms, and sometimes even toothache and conjunctivitis (pinkeye).

Our health- and environment-friendly, organic cleaning and disinfecting agent kills 99.9999% of Legionella bacteria and all other types of mold, fungi, viruses and bacteria.

In addition to protecting your health, a regularly maintained air conditioner is also cheaper to operate, as it consumes less electricity.

To protect our customers and their equipment, we do not use aggressive, chlorine-based detergents or A/C cleaning liquids available in stores. These products contain a number of auxiliary chemicals – chlorine-based disinfectants also contain at least 3% active chlorine!
They are not 100 percent degradable, so chemical residues remain on parts of the air conditioner, and mix into the air in the room when the unit is used. Furthermore, they are strongly alkaline, and cause corrosion, erode the aluminum plates of heat exchangers, burn off their protective layer and weaken their material.

The A/C cleaning agent we use consists of hypochlorous acid and water only. Hypochlorous acid is a very clean and natural substance. It does contain chlorine, as it is made from salt, but only in very low concentration, less than one thousandth. It is pH neutral and does not irritate your skin. Therefore it does not need to be washed off surfaces, and can degrade fully in a matter of minutes and leave in an environmentally-friendly way. 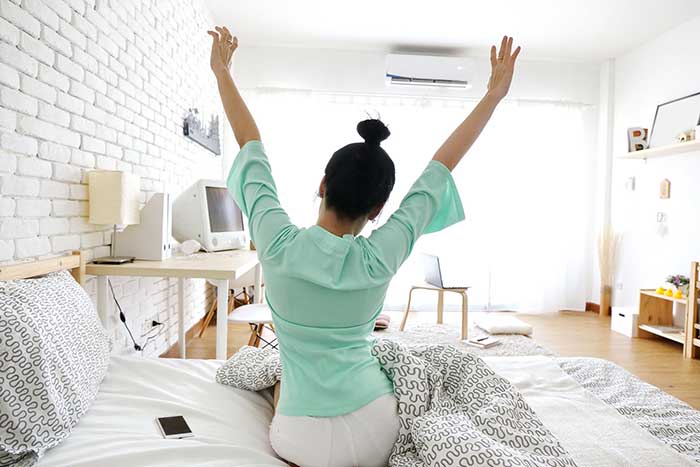 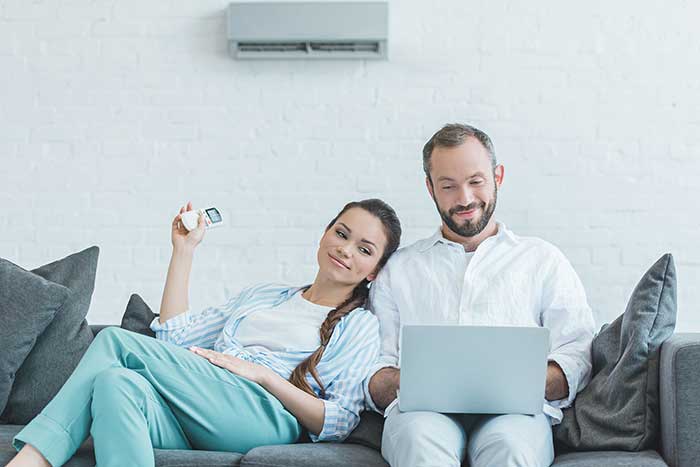 Hypochlorous acid, this special substance, is also produced in the human organism, so it has no detrimental health effects. In the human body it is generated by the immune system, which deploys it to destroy invading fungi and bacteria that may cause infections. In some countries – e.g. the USA, the UK, Japan and other Asian countries – hypochlorous acid is also used to treat wounds and disinfect skin.

This pH neutral substance has much more disinfecting power than traditional A/C cleaners.

It provides protection against 99.9999% of the mold, fungi, viruses and Legionella bacteria found in air conditioners.

It cleans, deodorizes and disinfects.

It is environmentally friendly, as it breaks down completely in a short time and leaves no ecological footprint. When released to the environment, it poses no threat to waters and does not pollute the soil or the flora.
It is organic in nature, as its production mirrors a biochemical process. When used, it does not induce any allergic reactions or trigger suffocating fits of coughing, nausea, etc.

The substance has also proved its worth in hospital conditions, as it has been demonstrated to be effective against all known enveloped and non-enveloped viruses found in a human environment.

Licensed by the Office of the Chief Medical Officer (OTH), tested by an accredited laboratory and certified by the National Center for Epidemiology, it is used by healthcare institutions, even in operating rooms.

Custom offers are available over 5 units.
Request a custom offer if the A/C units are located in several apartments within the same building or in neighboring streets.

A surcharge of HUF 3,000 per indoor unit will be applicable if the device is greater than 4,5 kW or difficult to access.
Payment can be made by cash or by bank transfer.

Attila did a great job, very impressed. I could feel and see the difference immediately. I will highly recommend you to all my friends and family.

Thank you Attila for your professionalism. The quality of your work is without doubt the best I've seen. Aircon is better than new. I would absolutely recommend bio-klima.

I’m not particularly ‘green’, but having stumbled on Bio-Klima’s website while searching for an A/C cleaning service (as the company I used to use was unavailable), I was intrigued and decided to give them a try.
The mechanic arrived at the agreed time, was polite, efficient and thorough, and even helped with a light fixture I was having a problem with.
(The disposable shoe covers are a nice touch and confirm the attention to detail – so many repairmen and other service providers you let into your home don’t bother with them, trampling and leaving marks all over your floor…)
All in all, a 5-star service. Recommended.

With young children in the house, a safe and healthy environment is always a priority. Attila from Bio-Klima did a superb cleaning job, now the family can breathe easy again!

Having just completed a minor renovation of our home, we felt that the A/Cs needed cleaning more than in an ‘ordinary’ year. We asked around, and a friend recommended Bio-Klima. We gave them a shot, and were not disappointed. A professional approach, friendly customer service, reasonable prices – the whole package. A+

Have used Attila for years, great family owned business. Very responsive and always on time, does an excellent job and I wouldn't use anyone else.

Perhaps the best money I have spent this year. I had 2 split units completely cleaned and believe me they were dirty. After 4 hours they are like new with not a single sort of mild anywhere. I will definitely use this guy every year now.

We serve the Budapest area

You can find out more about which cookies we are using or switch them off in settings.

This website uses cookies so that we can provide you with the best user experience possible. Cookie information is stored in your browser and performs functions such as recognising you when you return to our website and helping our team to understand which sections of the website you find most interesting and useful.

Strictly Necessary Cookie should be enabled at all times so that we can save your preferences for cookie settings.

If you disable this cookie, we will not be able to save your preferences. This means that every time you visit this website you will need to enable or disable cookies again.

This website uses Google Analytics to collect anonymous information such as the number of visitors to the site, and the most popular pages.

Please enable Strictly Necessary Cookies first so that we can save your preferences!

Please enable Strictly Necessary Cookies first so that we can save your preferences!

Adatkezelési tájékoztató (only in Hungarian)